With a higher standard deduction due to the 2017 Tax Cuts and Jobs Act, contributions to charity are now non-deductible for many Americans as fewer people will be itemizing. However, you can still utilize financial planning charitable strategies to help your bottom line as you implement your charitable giving strategy. 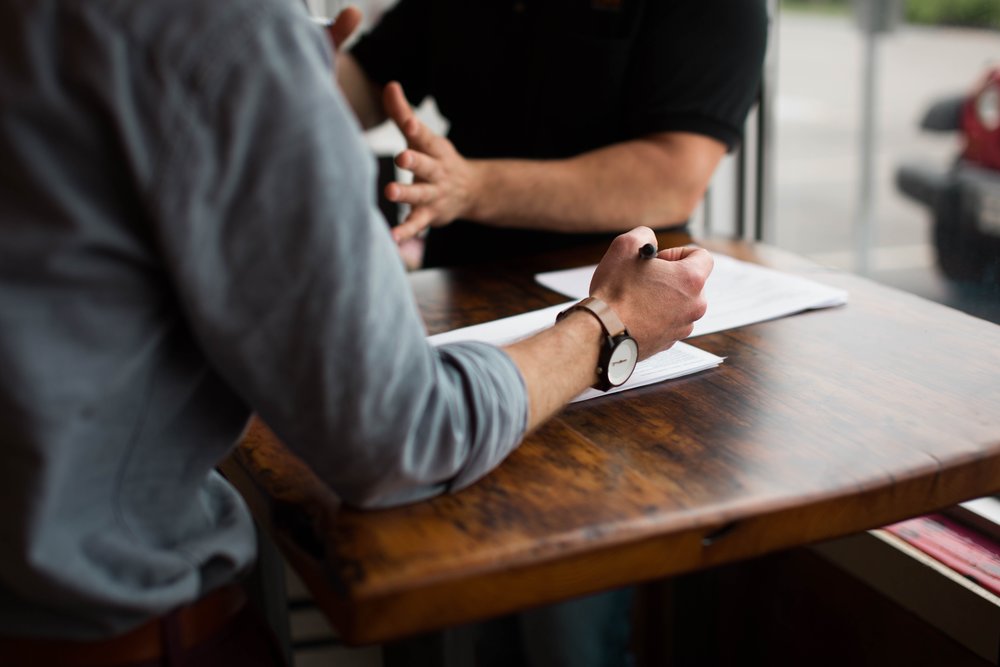 There are many ways to get an upfront deduction while spreading out the contributions to charity over time.  Some people use charitable remainder trusts (CRTs), private foundations, and grantor charitable lead funds. Donor Advised Funds (DAF) are generally the easiest, most cost-effective, and a convenient way to get an upfront deduction.  You can “advise” the donor advised fund to disburse the actual fund transfers to your designated charities over time.

Since contributions to a DAF can be invested, delaying the disbursement of the contribution can also possibly lead to a bigger impact on the charity as your potential gift grows from investment returns. And unlike a private foundation, DAFs don’t require minimum distributions on an annual basis.

A commonly overlooked strategy with wide applicability is donating appreciated stock directly to charity, instead of selling stock and donating after-tax proceeds.  Donating the stock directly has a two-fold benefit: 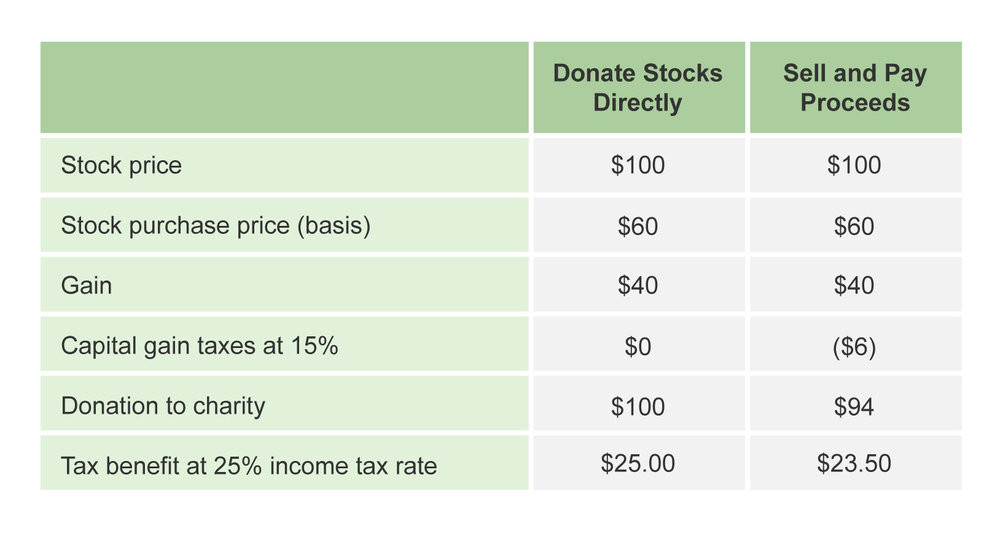 When thinking through your charitable giving strategy, we suggest identifying stock positions that have the largest capital gain relative to the stock price as the best candidates for donating directly to charity.  If you like the stock and don’t want to change your portfolio much, there’s no “wash sale” rules on gains, so you can donate the stock and simultaneously buy the same stock without adverse tax consequences.

For donors bumping up against their charitable limitation of 30% for long-term capital gain property, one strategy might be to take a special election that allows the donor to increase the AGI limitation to a public charity from 30% to 50% if the property contributed is deducted at its cost basis instead of its fair market value. The donor will have to pay the capital gains, but the overall deduction in that year could be larger. This strategy works best if the cost basis is close to fair market value.

While donating appreciated stock is an excellent strategy to save on taxes, donating stock that’s currently trading at a price lesser than you bought it for is an awful move.  The better route is to sell the losing position to get the tax benefit of the loss, then donate the cash proceeds to the charity.

For people over 70.5 years of age, another method is the Qualified Charitable Distribution (QCD).  With a QCD, you make a contribution directly from your IRA of up to $100,000 to a charity — without being liable for income taxes on the distribution.  Given the high standard deduction, a QCD is much more appropriate than taking a taxable distribution from charity and offering the proceeds to the charity because the gift may or may not end up being tax deductible. 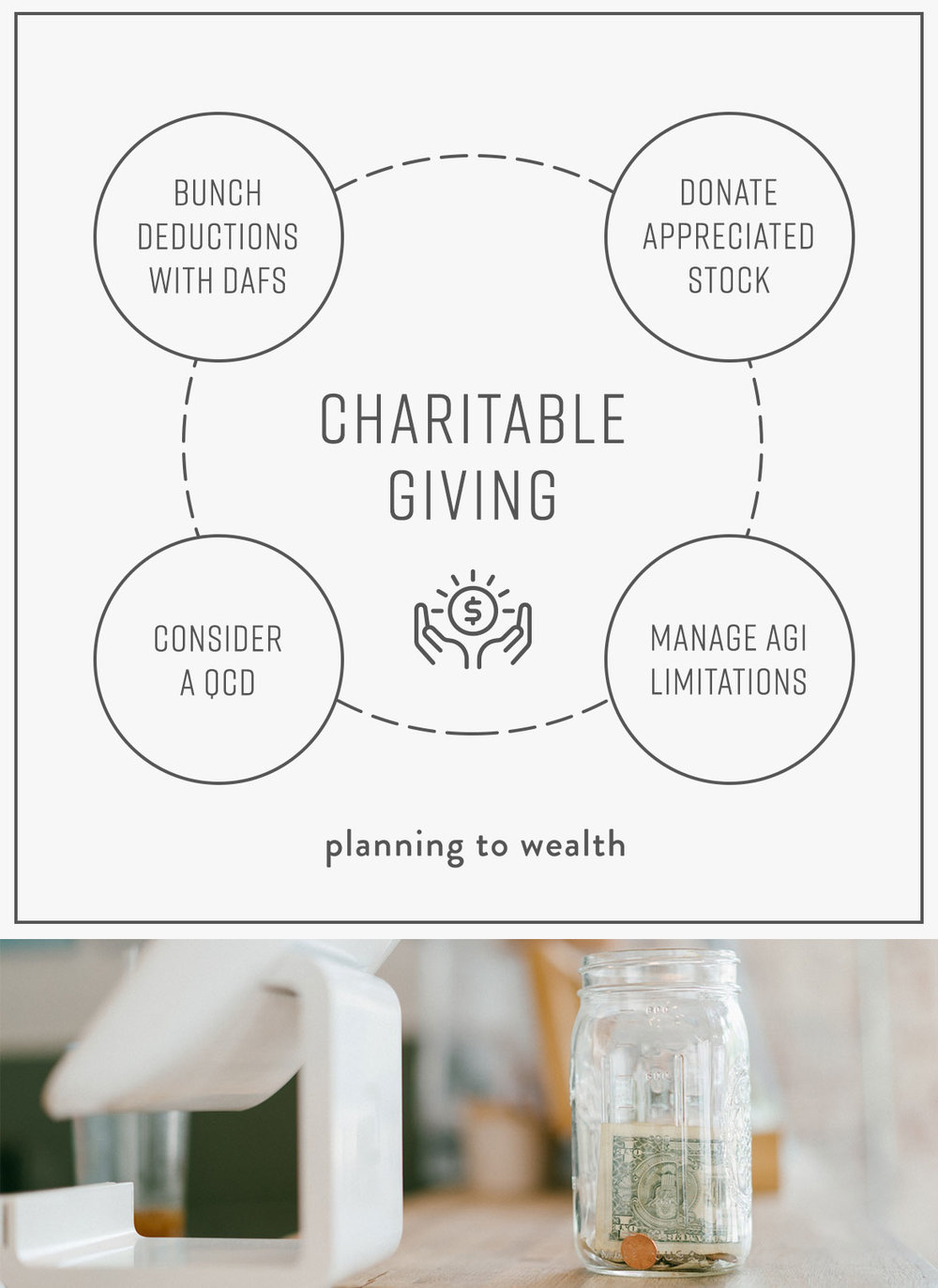 Moreover, the QCD counts toward the required minimum distribution (RMD) without adding to Adjusted Gross Income (AGI) in the tax year. Keeping AGI down brings ripple effects across your financial plans:

Keep in mind QCDs have very specific stipulations, so tread carefully and seek professional advice when you’re doing one.  QCDs must go directly to a charity; a distribution from your IRA to a DAF or private foundation won’t work. Additionally, you can’t receive a benefit from the charity in return for the donation i.e. a QCD for that charity golf tournament with your buddies.

Getting a statement of acknowledgement from the charity is highly recommended.  Unfortunately, company plans don’t qualify for a QCD. Forget doing a QCD from a 401K or SEP IRAs.  Remember, it’s important to tell your CPA about your QCD, since the 1099R won’t show it.

A lot of people don’t realize there are income limitations for donations to charity.  For example, if you made $100,000 and then turned around and gave $100,000 to charity, you’d still owe income taxes on $40,000, since the IRS limits charitable deductions for cash and public securities donations to 60% of AGI. Another scenario is when wealthy families have large assets relative to income that they want to give to charity, but the donations won’t be deductible because of AGI limitations. For people that give large amounts to charity relative to their AGI, the QCD can help avoid the AGI limitations that protect all their charitable donations from deduction.

Executing a Roth Conversion in a year where your charitable deductions exceed AGI limitations for deductibility can also keep more of your charitable contributions deductible.  In a Roth Conversion, you pay the taxes on a distribution from a regular IRA into a Roth IRA. In doing so, you earn the ability to never pay taxes on gains and distributions from that Roth IRA in the future.  A Roth IRA makes the most sense in a year of low income so that the IRA distribution is taxed at a low tax rate (i.e. you take time off from work or you just retired). Likewise, a year of low income hurts charitable families that won’t be able to have all their donations deductible due to the 60% of AGI rule.  By adding income through a Roth Conversion, more of the donations become deductible.

Think through which assets to give to charity at death

Families should carefully consider which accounts go to charity in their estate plan.  In general, it’s much more tax efficient to give charities IRA funds, rather than cash or securities.

Let’s say an elderly woman has an estate with two assets: $100,000 in cash and $100,000 in an IRA. The woman wants to give half her assets to charity and the other half to her son.  Leaving the IRA to charity and the cash to her child is much more tax efficient than leaving the IRA to her child and the cash to charity.While maximizing every last deduction when giving to charity isn’t the primary consideration for most people, raising personal awareness of the many charitable strategies available to donors can help save you money and ultimately create more capacity to help charitable organizations important to you.

David Flores Wilson, CFP®, CFA, is a New York City-based Senior Wealth Advisor at Watts Capital. He can be reached at dwilson@planningtowealth.com.

I Will Teach You To Be Rich